The Comparison of NMN and NR

The Comparison of NMN and NR

Nicotinamide Ribose (NR) and β-Nicotinamide Mononucleotide (NMN) have become more and more popular in recent years, which have gradually become well-known to the public. Scientists have a more comprehensive understanding of these two ingredients. What is the relationship and difference between NMN and NR?

Nicotinamide Ribose (NR) is naturally found in milk and dairy products. In 1944, NR was first discovered by scientists as a growth factor of Haemophilus influenzae. In 2004, NR was used as a precursor of NAD+ for anti-aging research. In 2012, NR began to be industrialized as a dietary supplement to raise the level of NAD+. The natural form of NR is extremely unstable, and NR currently used in dietary supplements is in its chloride form. Therefore, NR has a long history in scientific development. 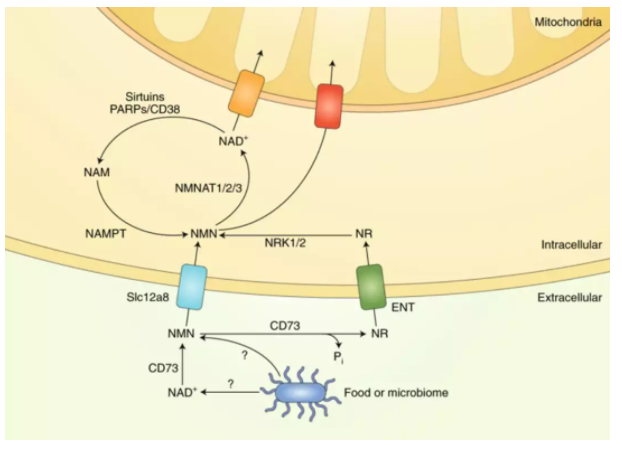 No adverse side effects have been found for these two substances so far, so that they can be taken orally directly. However, a series of scientific studies have shown that most of the NR that enters the human body through oral routes will be digested by the digestive system into nicotinamide NAM. The conversion of nicotinamide to NAD+ will be limited by the rate-limiting enzyme NAMPT in the human body. Therefore, supplementation of NR is still not efficient in improving NAD+. NR is smaller in size and easily penetrates cell walls. As for NMN, its molecular weight is larger than NR, its volume is larger, and its mass is heavier. Because it is a combination of NR and phosphate, 2 NMN be converted into 1 NAD+, will NMN be easily absorbed? Clinical studies have found that through oral administration of NMN, the level of NAD+ can be improved quite well. In January 2019, scientists at the University of Washington School of Medicine found the truth: There is a transporter named Slc12a8 on the surface of the cell membrane. The Slc12a8 protein will transport NMN directly into the cell with the help of sodium ions, and it will act quickly. Function, used in the production of NAD+. When NAD+ levels decrease, cells also increase the expression of the Slc12a8 gene, increasing their ability to transport NMN.