Lotus Plumule Extract uses lotus seed Nelumnbomucifera G. young leaves and radicle as raw materials, and the extract is usually standardized for total alkaloids. The seed of Lotus is a commonly used traditional Chinese medicine blindly, with the effects of clearing the heart, lowering fire, lowering blood pressure and strengthening the heart. Pharmacological studies in recent years have shown that alkaloids in Lotus Plumule Extract have the effects of lowering blood pressure and anti-arrhythmia, and have broad clinical applications. Moreover, lotus seed heart resources are abundant in China, which is of great development value. 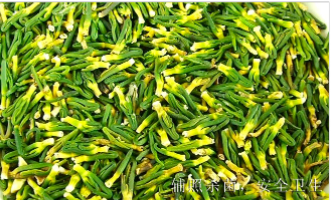 2. Anti-arrhythmic effect: Neferine, liensinine, isoliensinine and liensinine have anti-arrhythmic effects. Neferine can inhibit Purkinje fiber, slow down the conduction, change the single-phase block of Purkinje fiber to biphasic block, and eliminate the arrhythmia caused by the impulse of reentry. Liensinine has an effect on the action potential of the slow response of the myocardium and the slow response internal current.

3. Effect on platelet aggregation: Neferine is a non-selective calcium antagonist, which can reduce the calcium release in smooth muscle cells and macrophages caused by ET-1.